In the photo below, during the Ceremony at the historical Palazzo Barberini in Rome with Eleonora Baldwin, the granddaughter of the famous Italian director and actor Vittorio De Sica. 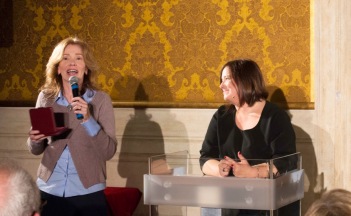 In 2015 this recognition was also given to Samantha Cristoforetti (first female Italian astronaut), Lapo Elkann, Fabio Zaffagnini and Lorenzo Cogo.

In the scientific section, this international recognition has been previously awarded to Renato Dulbecco (Nobel laureate in Medicine 1975).

The Gran Galà delle Eccellenze Calabresi award was given in the past to significant figures of Calabrian origin. The ceremony took place at the Teatro Quirino in Rome at the presence of the city mayor. Here a video with the motivations, and a short video of the evening.

Cultural event held in the Rome City Hall Campidoglio. It awards every year significant figures of Calabrian origin who have been successful in their work in the fields of science, culture, sports, journalism,  and have been ambassador of Calabria and its values around the world. In the past the Committee honored, among others, Renato Dulbecco (Nobel laureate in Medicine 1975), Leon Panetta (Director of the Central Intelligence Agency) and Santo Versace (fashion house Versace).

International recognition awarded to individuals for their achievements in the fields of  mathematics and physics. In the previous years, it was given to Andrew Wiles (Fields Medal winner, the first to prove Fermat’s Last Theorem), Edward Witten (world’s leading researcher in superstring theory) and Enrico Bombieri (known for work in number theory).

Kiwanis International (founded in Detroit in 1915) is a thriving organization of service- and community-minded individuals (600,000 members in 96 countries) who support children and young adults around the world. The We Build Award was given to me for promoting South Italy with my scientific achievements and work of internationally recognized researcher.

FI.DA.PA. promotes the initiatives of women working in the field of arts, professions and business, without distinction of race, language, religion. It is affiliated to the International Federation of Business and Professional Women which is represented in over 100 countries throughout five continents. The award was given to me for merits obtained in the field of research in astrophysics at the Johns Hopkins University, which made famous, beyond its borders, the name of Calabria and Italy.

This site uses Akismet to reduce spam. Learn how your comment data is processed.